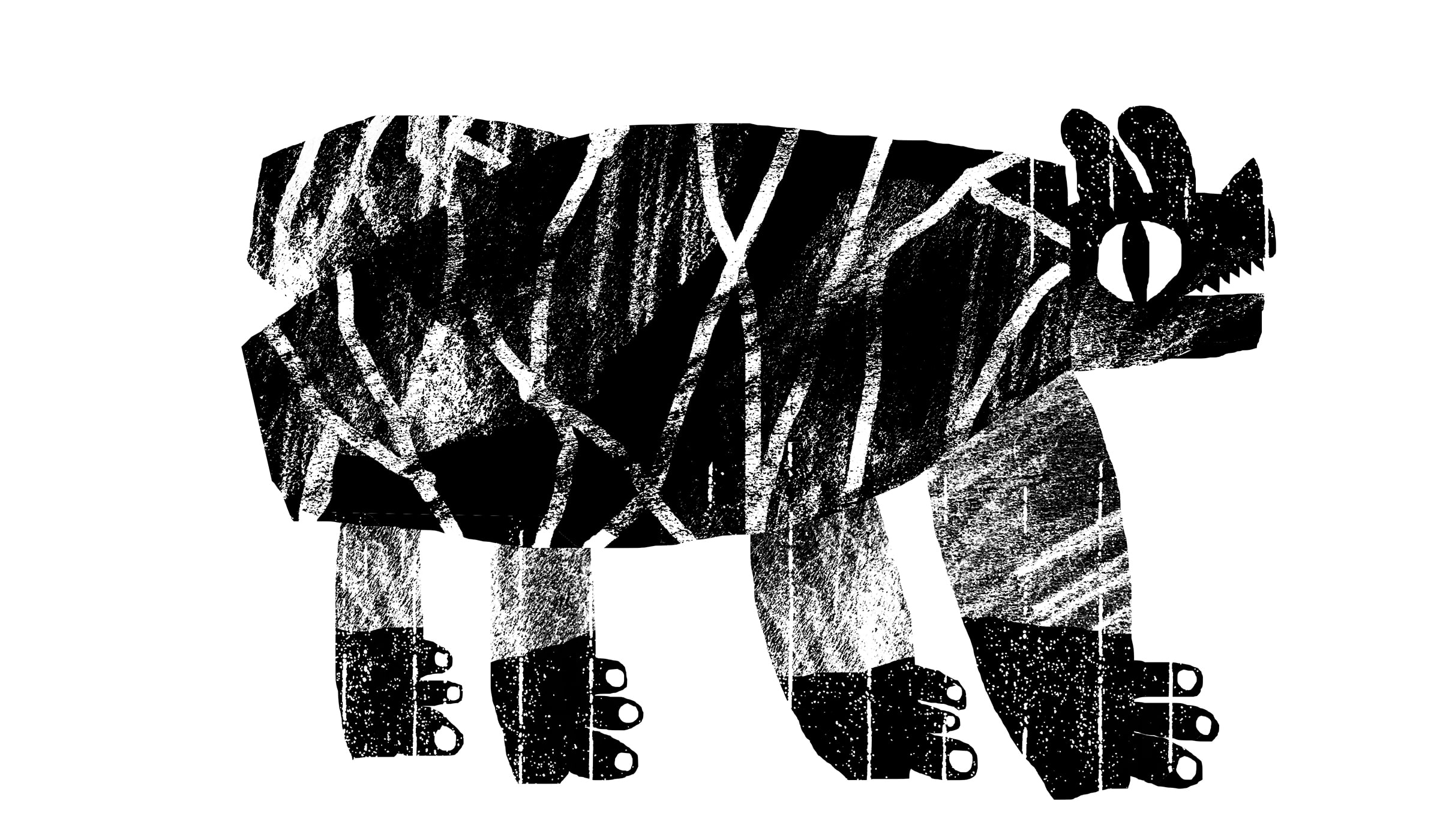 Illustrator Alex Diel on making zines and finding his voice

Alex Diel is an illustrator with a background in graphic design. He makes mostly black and white, incisive and beautifully rough Illustrations. His works are poster-like, and texts and lettering play an equally important role along his bold characters. We asked Alex to tell us about his creative path,  illustration process and the zines he creates.

Please tell us a bit about yourself and your background

Well, I studied Communication Design Graphic design in Wiesbaden, which is next to Frankfurt. But before that I started studying architecture. When I finished school, I didn't really know what to do at all. I just wanted to do something artsy, I guess. But I didn't finish because I quickly realized that it wasn't for me. Then I discovered graphic design as a discipline, and applied also in Wiesbaden, while still studying architecture, spending a whole semester preparing my portfolio. It was in around 2012 or 2013, still the time when you applied for Communication Design studies with those huge old-school portfolios, called ‘Mappen’ in German, basically gigantic folders full of traditional artworks, like figure drawings and technical drawings, etc.

In Wiesbaden I studied mostly graphic design, because illustration classes were very conservative, we were only allowed to draw realistically, using traditional materials, mostly ink. We had to pick historical figures, like Napoleon and draw these people in a very realistic way. Nobody really enjoyed these classes.

After I got my Bachelor Degree in Communication design, I went to study Wurtzbach, in Bavaria to get my MA in illustration. And I have been illustrating for around two years now.

Tell us about your illustration style and techniques, how did you come up with it?

In the beginning, it was sort of a struggle, because, like I said, I didn't really know how to approach the whole thing. I’ve been drawing since I was a kid and always had these crazy sketchbooks full of pencil scribbles. But at the end of the day, they never looked finished, and always looked like drafts.

I didn't know how to turn them into a finished digital illustration. It took me one and a half years figure out how to do it. And again, it was a kind of an accident, I was working on this study project about animals and ecosystems and started googling reference photos of Elks, I drew those with a pen on paper, and then scanned them in. And then l painted the whole thing with my mouse in Photoshop, no graphic tablet or anything. And that's how I stumbled upon the technique I use now. I can't really plan how the illustration will look when I'm finished. Let’s say I decide to make an illustration of a person on a skateboard, I make the sketches and start digitizing them, but somehow, the result never looks quite like the sketch, it always ends up being totally different. So my process is rather messy. I use the lasso tool and then just start drawing some random shapes with the mouse, and make collages out of them. I often have three or four different things open and copy things from one to another. It’s a very intuitive process, I get into this flow state.That’s how I end up with these characters. Sometimes I see a shape that looks like a leg, so I start working on the leg and somehow it turns into a character. There are also a lot of hand-drawn elements in there. I scan them and then I use some filters. I also use a lot of textures, some of them are drawings mixed up with photos. So in a way they are digital collages.

How did you start making zines? What is it about self-publishing that interests and excites you?

I just started doing zines because of their accessibility. You don't have to go through a long process of approaching a publisher. When you are working on a big book project, where each book costs 40 euros, this whole responsibility weighs heavy on you. So the thing I like about zines is that you can just make them yourself, you don’t depend on anyone. You can just go to a coffee shop, and I don't know, print 40 pieces on really cheap paper, so that one zine costs one euro or even less. And if they are messed up, it doesn't matter. You can always use them for the next project, scan, rework, so if you make a mistake it’s not important. It's rough and quick. You can always carry them around or hand them out to people, mail them to friends. You can showcase your work this way.

You’ve printed your  most recent zine  at Irrelevant Press in Oakland, but you are based in Germany, why is that?

It all started in the middle of the night, last November. Don’t ask me why, I don’t really know. I thought they were cooI, so I just wrote them. I heard of them because they did a project with a colleague of mine, Ramon Keimig. I wasn't even aware of the fact that they were in the US, or that this could be a problem. And that's how I approach things generally: I just to do it. And then later I realize that the endeavour could be difficult, but nevertheless, I still do it.

Tell us a bit more about this zine, what is it about? How did you come up with the idea?

This zine is a small showcase of the different characters and illustrations I did recently. There is no story or specific theme here. I sent my works to Irrelevant press and we exchanged emails trying to figure out what I want and what was technically possible. For instance, I wanted to print some pink pages. But the paper couldn't take all of that pink, so we had to make a halftone pattern to simulate the pink surface.

There was a number of technical details which were difficult to clarify over email. But it worked out fine. It also took some time to get them shipped to Germany. And then the package got stuck at the customs, and I couldn't get hold of it for a while. We started working on the zine in November and I just picked up the zines recently. But I made a new friend in the US due to this late night email exchange, so that’s great!

Text and typography play an important role in your work, do you use certain phrases as an inspiration for the picture, generally what comes first when you work the text or the image?

I have two separate stacks of paper on my desk. One is for characters and one is for these texts. And one part of me is kind of looking for the aesthetics and the composition. And then at the same time I’m always listening to people and to my myself and record those snippets. These texts are the little conversations I overheard on the street or fractions of my own thoughts. The text pieces have to be short. I want them to be more like poster slogans rather than full conversations you have in a comic book. I’m trying to find metaphors and hidden stories between the lines, with several layers of meaning. I’m also trying to find things people and I myself can relate to. For example, one character says, “I thought about making a joke and in the end, I didn't make a joke”.  It is a short random sentence, but you can relate to it because we all sometimes, either at parties or in conversations with somebody, ponder on making a joke and then decide not to do it, being afraid that the joke is not funny, and it will make us look ridiculous.

Some of the texts are random, some phrases come to me while I shower or, just pop up in my head in completely unrelated situations. And on the other hand, I try to connect them with these characters. I don't make characters in a classical way, imagining their  backstory, thinking what they might say on a Monday or while riding a bicycle. It's more associative, like automatic writing. I attempt to avoid cliche characters, like a lonesome cowboy in the desert, or an angry sailor fighting in the bar etc. Sometimes I just imagine these characters being at the party and talking to each other. And it's a mixture of deep thoughts and drunk nonsense and cynical thoughts. Some texts might not make sense for everybody.

As for lettering and typography in your work what influences your stylistic lettering choices?

It’s all again very intuitive. I started drawing letters by accident. I was sketching in my sketchbook, brought these sketches to class and then I showed them to my professors. Some of these little sketches had some text written next the characters. And some didn’t. And I didn't want to show the ones with text because I thought it was just for me, and I was a little embarrassed. But it turned out that that everybody related to the ones with the text, they seemed to work better for the people. So I then I started making the texts the same way I do my characters, with a mouse, lasso tool and no graphic tablet. I came to using capital letters because they are more readable at first sight, when you do them in this technique. I tend to experiment a lot with composition and placement and pay a lot of attention to the text’s readability.

I don’t always use text in my work, right now, for instance, I'm doing some characters without much text because I'm focusing more on the backgrounds, dynamics and movement. 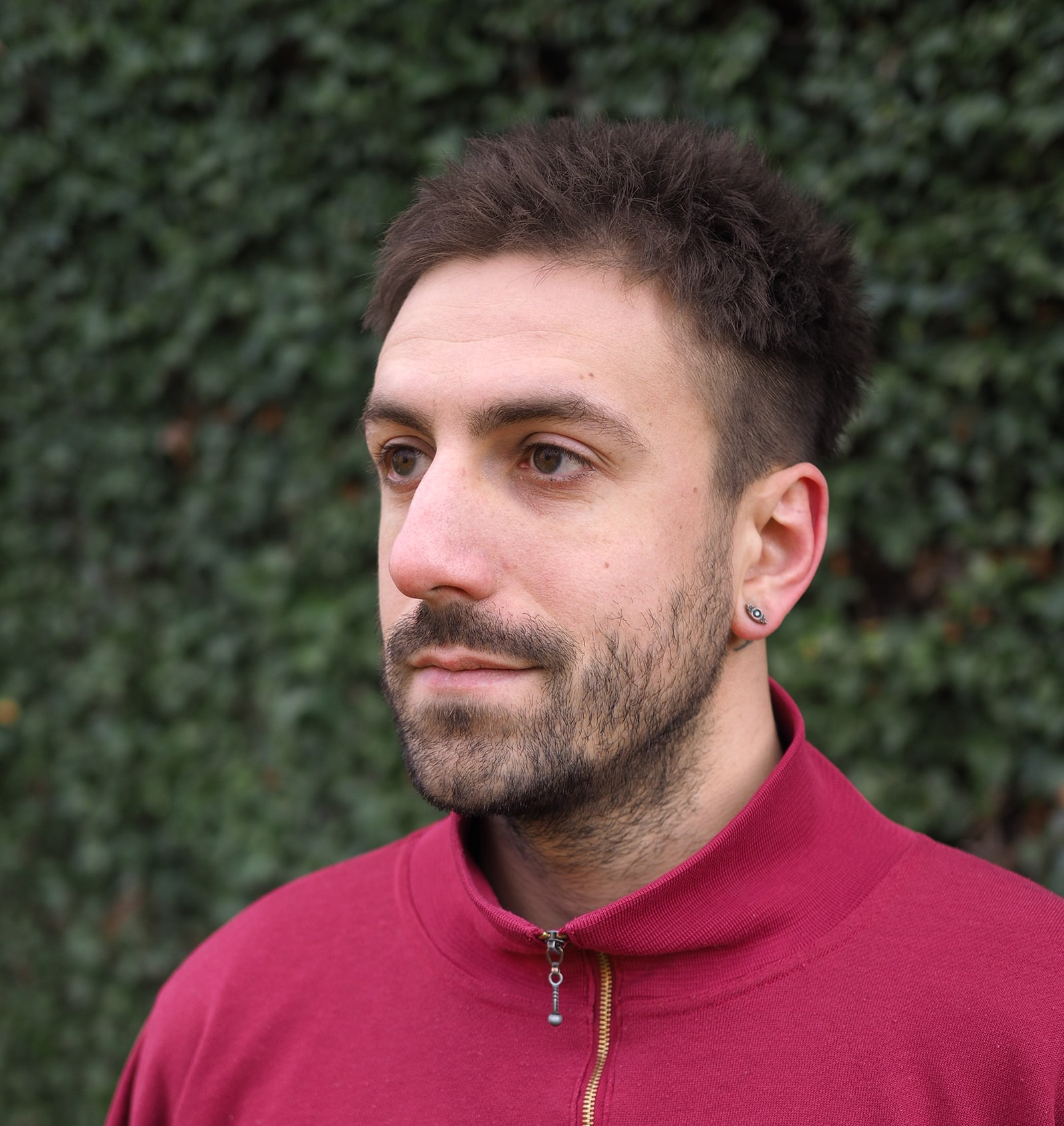 Alex Diel is an up-and-coming illustrator and graphic designer based in Würzburg, Germany. His clients include Strangers Fanzine, Jugendkulturhaus Cairo, 101 Gallery, Sensor Magazin, Kellerperle and more. 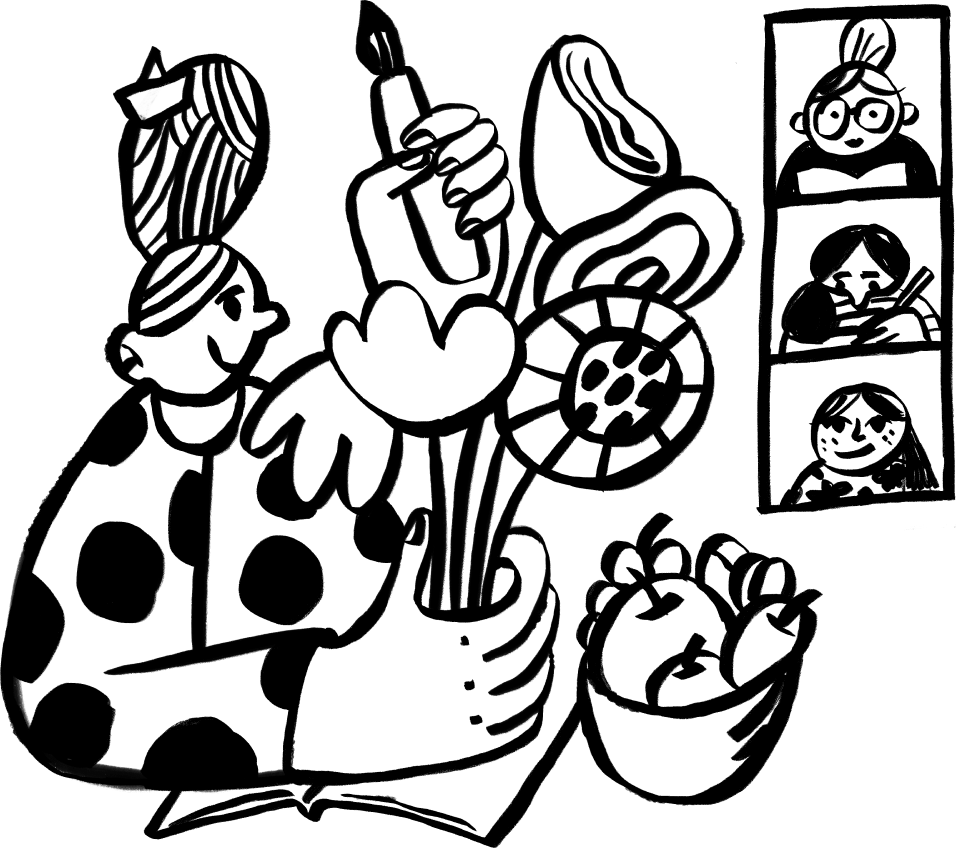